Rotterdam Sightseeing Spots: Explore the Best Activities and Attractions in the City

Rotterdam is the Netherlands’ most popular destination, next to the capital city of Amsterdam. Sightseeing in Rotterdam is very popular amongst young visitors, hipsters and business travelers from all over Europe.

Coming here is easy, as the Rotterdam Airport connects with several cities in Europe, and it is only an hour away from Amsterdam and The Hague by train. The city transport system is very efficient, which means Rotterdam sightseeing is safe and convenient.

Below are five of the most iconic Rotterdam sightseeing spots as you explore the best activities and attractions in the city.

The iconic Erasmus Bridge is the leading symbol of Rotterdam. Named after Desiderius Erasmus, the famous Dutch theologian and philosopher who hailed from Rotterdam, this unusually designed bridge connects the northern and southern parts of the city.

This elegant bridge has been hailed by artists, architects and city builders all over the world as an architectural work of art. It looks like a giant harp or a metallic neck of a swan soaring over the largest harbor in Europe from afar.

Designed by Ben van Berkel, Erasmus Bridge is an 802-meter-long cable bridge and is 139 meters high. It is also the biggest and heaviest bascule bridge (which lifts to allow ships to pass under it) in Europe.

It was opened by Queen Beatrix in 1996 and has remained popular through the years. The bridge has been used in important events such as the 2010 Tour de France, Rotterdam Marathon and The World Port Days.

Nicknamed the Swan for its sizeable upright mast that resembles the neck of a swan, Erasmus Bridge is even more spectacular at night, as lights flood the mast and the bundled cables rise high above the water. It takes on a completely different look after dark. 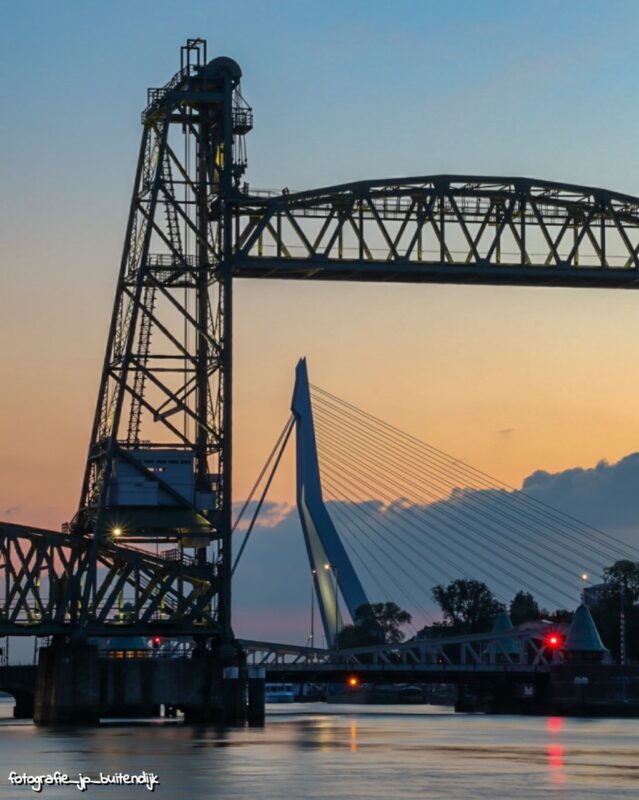 Another city symbol is Sint Laurenskerk or the Grote (Great Church of Rotterdam), or simply Laurenskerk, as more popularly called. This is known as the main church of Rotterdam, built between approximately 1449 and 1525. Today, it is the only remaining late Gothic building from the original medieval Rotterdam.

Locals and historians honor Laurenskerk as the symbol of the city’s rich religious history. History books teach that in the Middle Ages, people were able to buy citizenship into the city by contributing 3,000 bricks to construct the tower. In more recent history, during World War II, images of the badly hit cathedral and its reconstruction afterwards became a symbol of hope for the city and its inhabitants.

When Rotterdam was attacked during WWII, the city center was almost completely wiped out, except for the walls and the tower of Laurenskerk. Immediately after the war. Rotterdammers rolled up their sleeves and began to build a new city. The people decided to restore only the medieval Laurenskerk as a symbol of the reconstruction of Rotterdam and the resilience of its people.

Discover our most recommended tours and activities

As one of the first all-stone buildings completed in Rotterdam, Laurenskerk truly represents the bygone years, as it remains standing against the surrounding modern city skyline. It is located in the old town center, not far from the Erasmus Bridge,

Some of the most important features of Laurenskerk are the high-vaulted ceilings, stone reliefs, the copper choir screen built in 1713, the carillon, three Marcussen organs (the largest organ in the Netherlands), the baptismal font of Hans Petri, and the bronze doors made by Italian designer Giacomo Manzù in 1968. The door panels depict the horrors of war and the joy of peace. Also worth seeing are the 17th-century tombs of Witte de With, Egbert Kortenaer and Johan van Brakel.

The medieval organs are important since Laurenskerk has been known as a haven of beautiful music through the centuries, even today. National and international artists provide ear-pleasing performances at the highest level, covering a variety of genres, including organ repertoire, early music on historical instruments, jazz, pop, and dance.

Within the church is a Rotterdam museum that tells the special history of Laurenskerk and the city. A museum interior was created in 2010 under the title De Laurenskerk. Visitors will be provided with a storybook that features 84 alternating stories and music fragments, images and sculptures. There is also a film showing about the bombing of Rotterdam, Coventry and Dresden.

The 300-step tower provides an amazing view of the city. For only 6 euros, visitors can climb up the tower all the way to the roof on Wednesdays and Saturdays, ten people at a time.

During the tower climb, which takes about an hour, a guide will narrate the history of Laurenskerk and the city, making the experience more worthwhile for visitors. Climbing the Laurenskerk Tower is one of the unique things to do in Rotterdam.

The Cube Houses (Kubuswoningen) are one of Rotterdam’s most iconic attractions. They are a set of innovative houses designed by architect Piet Blom and based on the concept of “living as an urban roof”.

The entire complex is a high-density housing with sufficient space on the ground level, optimizing the space inside. The homes are literally cubes, tilted over by 45 degrees on their side.

After more than 30 years since they were built, the Cube Houses remain as one of the city’s most eye-catching developments in the Oude Haven area of the city center.

Learn more about Rotterdam’s Cube Houses and enjoy a slice of the city’s most creative and striking architecture.
book a tour now

Atlas Obscura describes them this way: “Straddled above roads and intertwined amongst themselves, Rotterdam’s string of cube houses, each tilted at an abnormal angle of 55 degrees, have stunned every commuter to ever exit the adjacent Blaak Train Station.”

As they are sure to catch attention and raise curiosity, one of the Cube Houses has been converted into a museum. Kijk-Kubus, as it is called, is a simple Rotterdam museum that serves as a show house, with an admission price of only 3 euros. Most of the cubes are privately owned.

Rotterdam’s Witte Huis or White House is a National Monument and a UNESCO World Heritage Site for its Art Nouveau style and significance in the city’s history. Constructed in 1898, the 43-meter tall building has ten floors. It was the first skyscraper in Europe, which means it was the tallest building on the continent at that time.

Today, it continues to attract visitors and onlookers for its beautiful façade of white glazed brick adorned with Art Nouveau mosaics and statues. It also has an observation platform on its flat roof and barred-door lifts, which were extremely modern in 1898.

Designed by architect Willem Molenbroek, Witte Huis was built at Wijnhaven 3, only a meter above sea level. The building was constructed from iron, steel and concrete, with two thick interior walls. It was one of the few buildings in the city that survived the WWII bombings.

In 2013, the picturesque Oude Haven and the Grand Café Het Witte Huis opened on the ground floor. People come here for a drink to enjoy a view of the little channel and old boat-houses.

Rotterdam’s Markthal (or Market Hall) is one of the unique architectural pieces in the world. It is a residential and office building that is shaped like a giant, inverted horseshoe with a market hall underneath.

The unique structural design features a large semi-circular grey façade, and inside the arc is a vibrant “Horn of Plenty” mural created by Dutch artists Arno Coenen and Iris Roskam, showing various colourful fruits, plants, insects, and flowers. Markthall was opened on October 1, 2014, by Queen Máxima of the Netherlands.

Markthal remains as the city’s newest and freshest icon, attracting many international press and visitors. It is located parallel to the Laurenskerk and at the location of the former dike along the river Rotte.

Experience everything there is to enjoy in Markthal by joining a behind-the-scenes tour to one of the busiest places in the Netherlands.
book now

Markthal is a building without a backside, which means all sides of the building are accessible. Residents can reach their apartments through six separate entrances leading to elevators and stairs. The building is curved, so the elevator hall structure is gradually changing in size and location floor by floor.

Markthal is a stunning piece of architecture. It is considered by many “as the largest artwork in Europe,” according to Design Curial, making it truly one of the leading hangout areas and sightseeing spots in Rotterdam.

This architectural wonder is hard to miss. It is 40 meters tall, 120 meters long, and 70 meters wide. Around 4 to 7 million people come to see Markthal every year, to shop and experience Rotterdam nightlife in its restaurants, bars, and over 70 other different businesses.

Arguably the most majestic sightseeing spot in the Netherlands are the windmills in Kinderdijk. Located just 20 km to the east of central Rotterdam, these 19 gigantic man-made windmills in the town of Kinderdijk are Instagram-perfect and almost surreal. They are the most popular and historic windmills in the country. They were built in medieval times along the canals and are now a UNESCO World Heritage Site.

Come to Rotterdam and explore the best activities and attractions in the city with friends and family. There are several museums and rides when travelling with children, not to mention Rotterdam Zoo, designed to entertain the little ones. Rotterdam is definitely worth the visit.